The settlement on the territory of the modern village arose next to the castle, the construction of which is attributed to the monks of the Templar order.

The name of the village is associated with its location relative to the two largest cities Zakarpattia – Uzhgorod and Mukachevo, as well as relative to the center of the valley in which it is located.
The first written mention of “serfs from Zeretne” in the Latin text dates back to 1407. In the sources, Seredne is known by the names “Zerethpuie”, “Zerethpue”, “Segedpue”. The settlement on the territory of the modern village arose next to the castle, the construction of which is attributed to the monks of the Templar order (Templars). The Order had possessions in European countries, including Hungary. The monks traded Solotvy salt and built a series of fortifications on the way from the mines to the European bazaars for the defense of the trade route and the collection of duties, and, if necessary, as a deployment point for small military garrisons. One of these fortifications was the tower-donjon in Seredny, 12-13 centuries. This is the only building of the Order on the territory of modern Ukraine. The activity of the Templars in this region is a rather controversial topic, and many scientists and researchers deny the fact that the order belonged to the construction of the castle. The head of the architecture department of the Transcarpathian Museum of Local Lore, J. Kobal, claims that the Knights Templar order has nothing to do with Srednyan Castle. According to him, the monks did not live in the castle, but in the 12th century monastery, from which on the hill near the river Velya’s ruins have been preserved.

According to one of the legends, the Templars hid the Holy Grail and a large part of their wealth in the Middle Castle. Researchers assume that the visible ruins of the tower are only a part of the fortress complex, and the castle itself is hidden under a layer of soil. The area of ​​the entire castle together with ditches, ramparts and walls reached 3 hectares. The castle structure was protected by four defensive lines. Ceramics, glass, jewelry and weapons found on the territory of the castle belong to the 15th-16th centuries.
The quadrangular tower-donjon with a height of 20 m, an area of ​​18.6 x 16.5 m and with a wall thickness of 2.5-3 m was built according to the example of the border Roman defense towers on the Rhine and Danube. Such towers generally had good visibility and the ability to conduct circular fire. The three-tiered tower had an entrance at the level of the second tier, to which a wooden ladder led from the courtyard, which was easily dismantled or burned in case of danger. In 1320, the Hungarian king Karl I Robert divided the lands between the Drugets, Doges, Debrecens and other Hungarian noble families, which continued internecine wars for a long time. At the beginning 15th century Srednyan castle was captured by Palochi magnates. In 1526, after the death of the last male Palocha, all the estates were transferred to the noble family of Dobo, with the management of which the greatest flourishing of Srednyi and the castle was connected. In the second floor 16th century the Hungarian general Istvan Bodo became the owner of the lands. During the 17th – 18th centuries. the castle repeatedly changed owners, and due to its flat location, it began to lose its strategic importance. Numerous Austro-Turkish and Austro-Hungarian wars, as well as the Hungarian Liberation War of 1703-1711, led to the destruction of the building.

In 1972, the first round of conservation works was carried out. In 2002-2003, the Carpathian Tourism Center carried out restoration work on the exterior of the castle. With the help of volunteers and students of the local school, the surrounding area, which turned into a real garbage dump, was given a decent look.
The seal of 1860 depicts a sheep with a flag with a cross in its front leg – a widespread religious image symbolizing the resurrection of Jesus Christ.

Coat of arms of the Middle 80s of the 19th century. similar in plot. In 1919, Seredne, like all Transcarpathia, became part of Czechoslovakia, in 1939 – part of Hungary, and since 1944 – part of the Soviet Union.
Currently, there are three churches in the village. At the Roman Catholic Church of St. Luke the Evangelist, 1806-1854 the Franciscan monastery and the monastery of the Sisters of the Congregation of Jesus operated (Tserkovna St., No. 1; Linska St., No. 20). 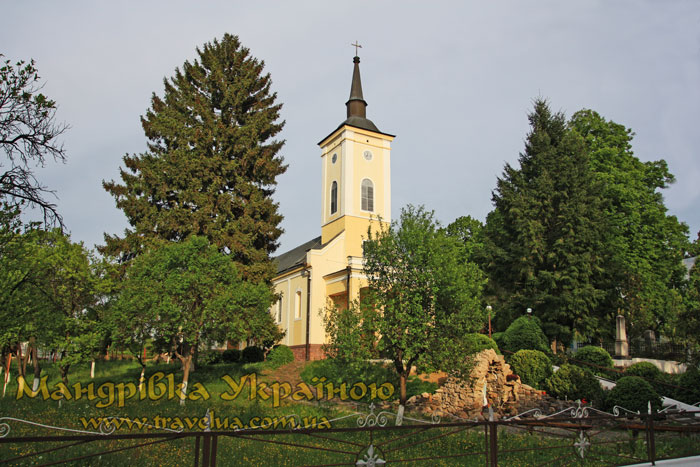 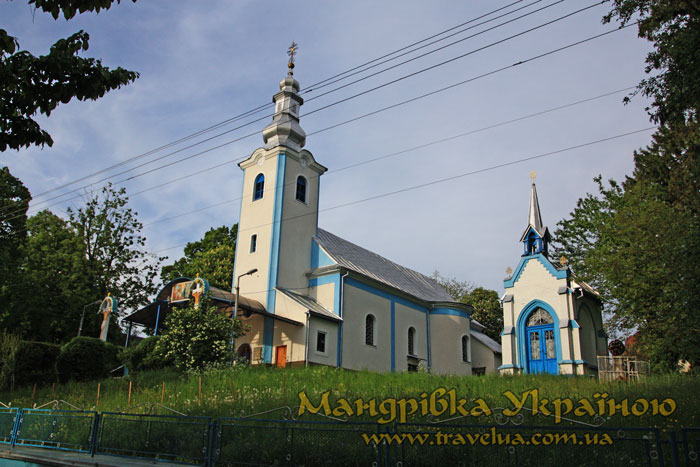 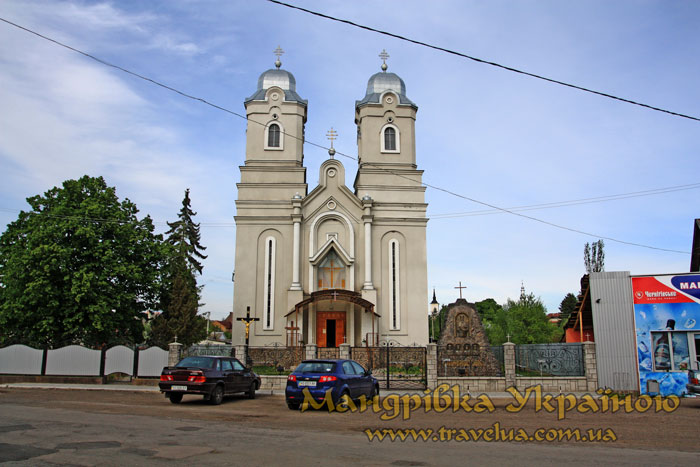 Sredne is also known for its wine cellars, which are currently used by the Leanka factory www.leanka.com. (Shevchenko St., No. 6) 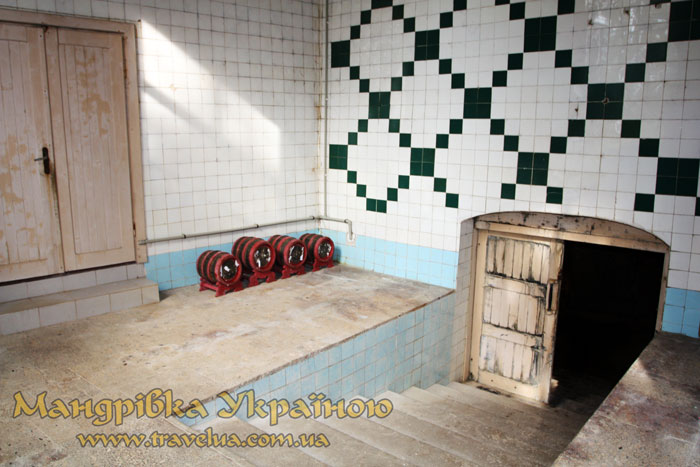 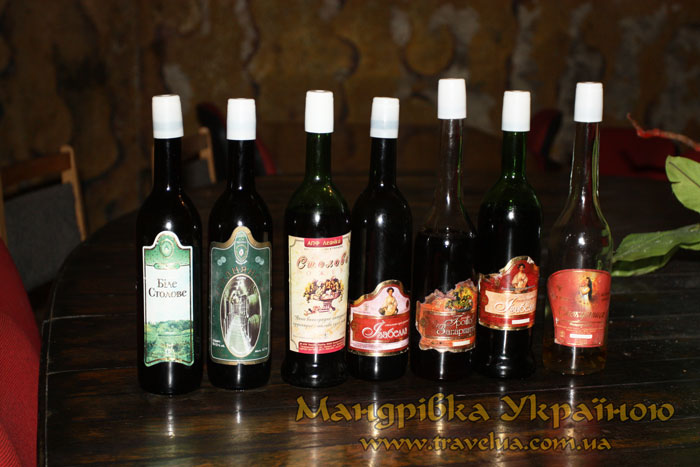 The climate and good location have become favorable factors for growing grapes in this area. Srednyan wines were exported to various European countries starting from the 17th century, and the Russian Tsar Peter I, after tasting the local wine in 1711, ordered to buy part of the vineyards. The wine is aged in barrels at a constant temperature of 12 degrees in a rock vault dug out in 1557 by the Turks captured by the order of the brothers Francisk, Stefan and Dominique Dobo, as evidenced by an inscription on one of the walls. Originally, the cellars were intended as storage, in case of a siege of the castle. The length of the cellars is more than 4 km.

UNESCO has included Srednyany cellars in its lists, which proves their uniqueness. 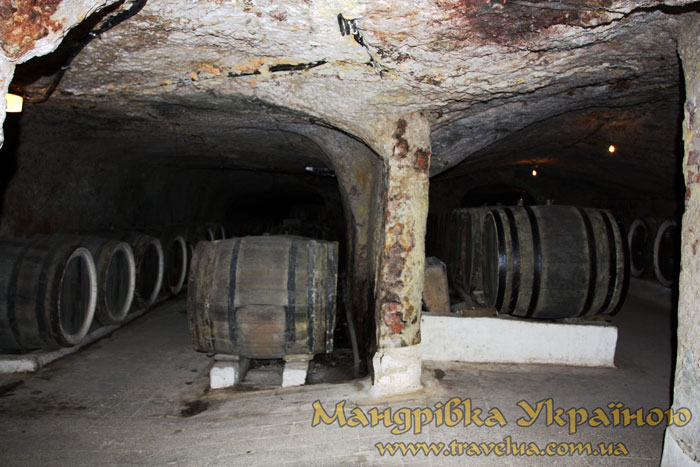 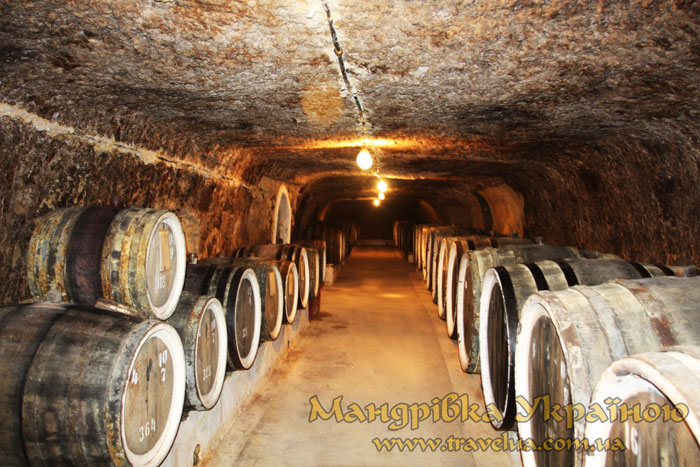 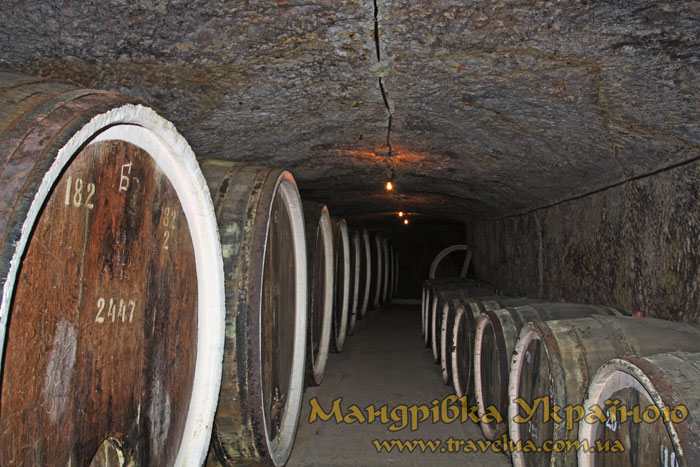 Currently, the tasting room has 80 seats, visitors are told the history of Transcarpathian winemaking and legends of the region. Drinks can be purchased at the company store. Excursions and wine tastings are held on Mon. – Friday, from 8:00 a.m. to 5:00 p.m.; Sat. – Sun. – tastings are held only by prior arrangement.

Before the Second World War, the Roman Catholic Church also had its vineyards and vineyards in Serednyi, but the Soviet authorities confiscated all the property. The community managed to return part of the church vineyard and wine cellar – 5 m wide, 26 m long, and about 2 m high.

In Zolochiv Castle two mysterious stones are now kept or the so-called “stones of the Templars”, which were found by a local local historian in the forest near the village Novosilki. One of the stone blocks is covered with a pattern in the form of intertwined wreaths of flowers and thorns (a symbol of life and death). On the second stone are carved Latin letters in a Gothic script and crapes, which is very similar to a cipher. The meaning of the mysterious text is still unknown. They say that if you put your hand on a stone with a picture, all your wishes will come true.

When you zoom out of the map, you can see more offers. Place the cursor on the rectangle with the price for
to see information about the accommodation, or click to proceed to the reservation.