Wawel Royal Castle in Kraków (Zamek Królewski na Wawelu) The Wawel Castle is located on the left bank of the Vistula River in Kraków.

Wawel Royal Castle in Krakow (Zamek Królewski na Wawelu) Wawel is located on the left bank of the river Vistula in the city of Krakow, ancient capital of Poland. Wawel translated from Polish Wawel is a hill. Royal I is of extreme importance in the historical consciousness and self-identification of the Polish people. According to excavations on the hill Wawel, a settlement of the Wislans was found, dating back to the 11th century. The construction of the first stone structure was facilitated by King Wenceslas II between 1290 and 1300. And already in the 14th century, King Casimir III contributed to the reconstruction in the Gothic style.
In 1499 a fire destroyed the castle. Restoration was started by Alexander Jagiellon, and the bulk of the restoration work was carried out under King Sigismund I the Old. But in 1595 another fire broke out in Wawel. After King Sigismund III Vasa leaves the castle, this leads to the decline of the castle, and new devastation occurred during the Great Northern War in 1702. Wawel Royal Castle includes many architectural and historical monuments. The most famous of them are the Wawel Castle itself, the cathedral and the castle fortifications. Entrance to the complex itself is free, but each exhibition has a separate entrance fee.

At the main entrance to the complex is the main gate, which leads to an old paved path. To the left of the entrance is a wall engraved with the names of people and companies that donated to the restoration of Wawel. Right behind the entrance you can see the monument to Tadeusz Kosciuszko, a famous Polish hero. On the left is the Cathedral of Saints Stanislaus and Wenceslas. The building of the cathedral was built in the 11th-12th centuries, Polish rulers were crowned in it at one time, and it was a burial place for them. Inside, the Altar of the Fatherland occupies its central position, and next to it are stone sarcophagi and the tomb of Casimir Jagiellon. The tower of the cathedral houses the Sigismund bell, which is one of the largest bells in the country. If you go further, then to the right of the gate you can visit the Cathedral Museum. 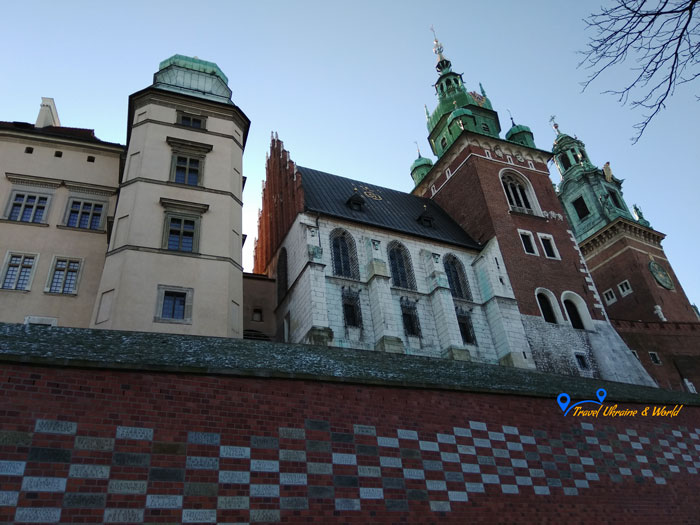 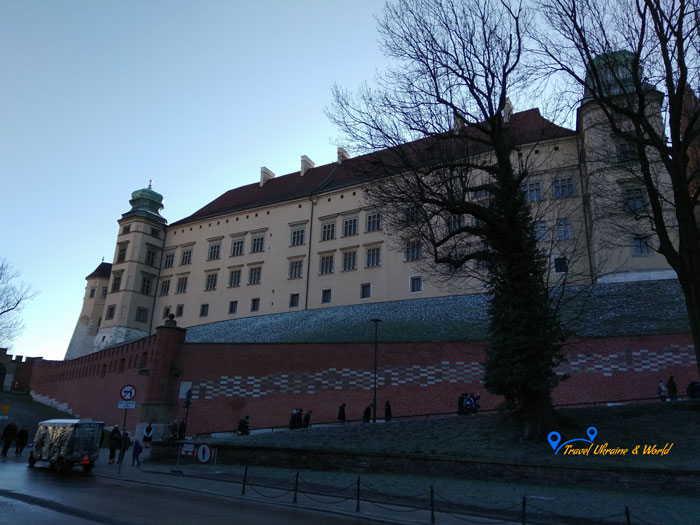 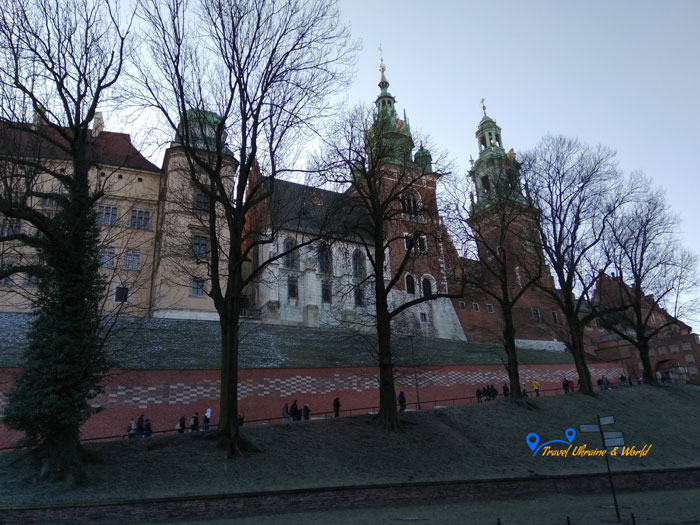 In the middle of the Wawel Castle courtyard are the ruins of ancient castle buildings. From the buildings that have survived to this day, you can see the palatium of the 11th century, the former residence of the princes, stone fortifications, a small castle in the Romanesque style of the building of the 12th century, rebuilt in the 14th century into a large Gothic castle. The Lost Wawel exhibition is also presented for review, where the oldest building in Krakow is the rotunda of the Blessed Virgin Mary. And to the left of the cafe, if you go along the road winding between the brick building and the tower, you can get to the entrance to the dragon’s cave. According to legend, a dragon lived here, who was defeated only by the son of the king of Krak, who founded the city of Krakow of the same name. And in the royal chambers you can see the main values ​​​​of the castle, large canvases depicting historical events and antique furniture, and in the main hall – a ceiling decorated with carved “Wawel heads”, an armed chamber in which there are collections of Polish and European weapons of the XV-XVIII centuries, as well as many ancient swords and armor and a treasury, as well as an exhibition called “The Art of the East.”

On the central square of the castle is the Sigismund Chapel, inside which are the tombs of the Polish kings: Sigismund the Old and Sigismund August. Nearby rises the 16th-century Jagiellonian chapel with the tomb of Anna Jagiellonian. To the left of it is the chapel of 1676 with burials of the Vaza dynasty. From 1724-1728. attempts to restore the castle are not brought to completion. 1793 and 1795 the aggressive partitions of Poland lead to the division of the country and Krakow becomes part of Austria. And they are converting part of the castle into barracks for the Austrian military.

After the renewal of its statehood in 1918, restoration work began on Wawel. Artistic works of foreign and national masters, paintings, furniture, and decorative arts were transferred to the castle.

Wawel Castle is a famous museum center in Poland. In its halls there are collections of weapons (such as the historical swords Shcherbets and Sahaydachny), tapestries, historical documents, state activities of Hugo Kollontai (Crown Sub-Chancellor since 1791, Great Lithuanian Referendar since 1786 17).

Plan of the Wawel Castle 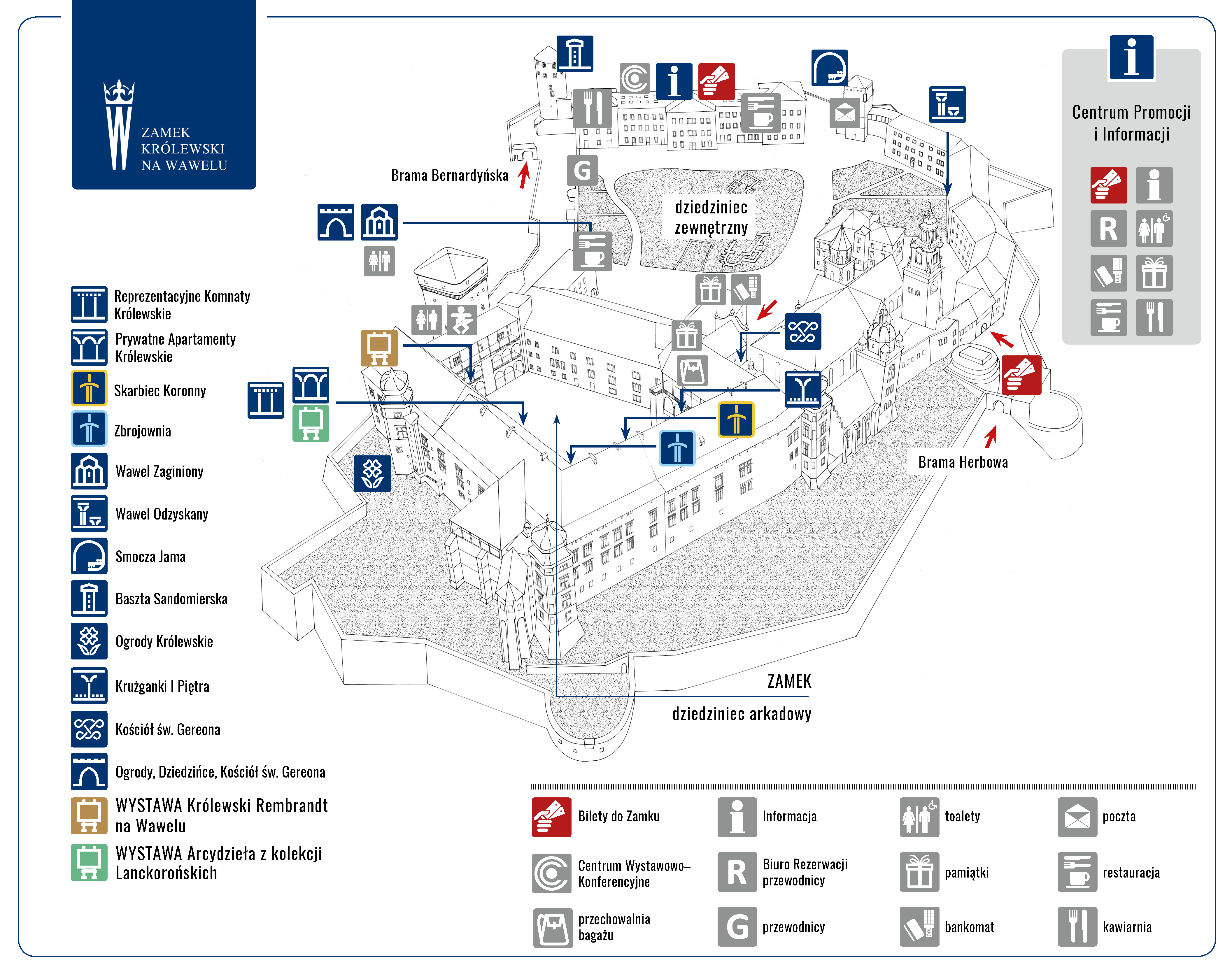 Be sure to check the website for opening times, here. The time may vary depending on the time of the year, and different halls and expositions have their own schedule. The cost is from 5 to 30 zł, depending on the exposure.

Tickets in the online system are available a week in advance, or if you run out online, you can purchase on the day of your visit at the box office.
Please note that most exhibitions have a specific entry time – this is indicated on the ticket.

Audio guides for visiting the castle’s exhibitions are available in the following languages: Polish, English, German, Russian, Italian, Spanish, French and Ukrainian. Audio guides are available for a fee and can be rented at the Advertising and Information Center.
Available at exhibitions: “State Rooms”, “Crown and Weapons”, “Oriental Art. Turkish tents” (Turkish tents are only available in Polish) and “Lost Wawel”. A multimedia guide for visitors to Wawel Castle.
This makes it easier for guests to access up-to-date information, for example. Thanks to the lighthouses located in the Royal Castle, the user automatically receives information about the object on which he is located.

The free program can be downloaded: We also made a small selection of applications used on our own experience TOP mobile applications for Poland.

How to get there

Parking spaces along the streets:
Paid on weekdays (10.00-20.00), paid at the parking meter closest to Wawel – ul. Smocza, st. Bernardyska. In order to see more housing offers, we recommend that you adjust the map scale to your device. Hover over the price box for information about the accommodation and click to go to the booking.